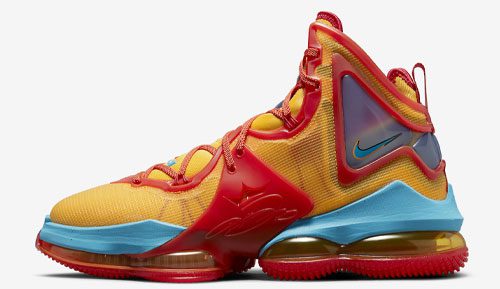 LeBron James isn’t just NBA royalty, he’s also a fashion icon known for his stylish attire. That puts a lot of pressure on his signature shoes, but they’ve so far lived up to the hype. Along with his signature Nike LeBron line, his name is associated with the brand’s Zoom Solider line. Ironically, his first signature shoe, the Nike Air Zoom Generation, didn’t carry his name although it was inspired by his favorite car, the Hummer H2. The LeBron 19 debuted in the 2021 film Space Jam: A New Legacy, and features a resculpted Zoom Air forefront along with a double-chambered Air Max heel unit, released in a colorful colorway well-suited to the movie in which it appeared and the player who wears it.

The first signature shoe to bear King James’ name was the 2004 Nike Zoom LeBron II, a statement-maker with a chunky ankle support strap, a ballistic mesh upper with leather overlays, a double-stacked Zoom unit, and a special traction pattern made for LeBron’s size and speed. In the years since, it’s become Nike’s flagship sneaker, integrating the brand’s latest technology with each new iteration. The LeBron IV, for example, used Foamposite padding for a molded, supportive fit. The LeBron V was the first to be double-lasted, with a removable locking strap in the midfoot and aggressive wrapping toe. With the 2009 LeBron VII, the Zoom Air system was replaced by Air Max, and it also incorporated Flywire, revolutionizing the upper to make it both stronger and lighter. All these pieces came together two years later with the LeBron 9, which set the tone for the iterations to follow, adding a carbon fiber support wing and Hyperfuse technology to the Flywire and Air Max technology of the VII. It’s probably no coincidence that the LeBron 9 was the shoe King James wore to secure his first NBA Championship title.

The History of the Nike LeBron