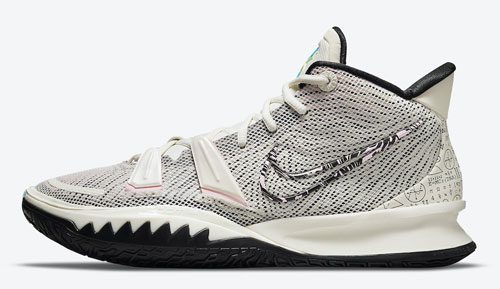 Among the most popular signature shoes in the NBA, the Kyrie silhouette has reliably produced high-performing mid-top sneakers that focus on traction, cushioning and explosiveness. The shoes typically feature several of Kyrie Irving’s quirky aesthetic touches, including teeth marks along the outsole, the “all-seeing eye” motif along the upper, and exaggerated colorways that appeal to every taste. The first shoe in the line, the Kyrie 1, was released in 2014 during Irving’s third year with the Cleveland Cavaliers, the first player since Kevin Durant in 2007 to launch a signature shoe with Nike. In a nod to Kyrie Irving’s artistic sensibilities, the Kyrie 1 was released in an expansive 19 base colorways and 21 accent colorways, giving fans lots of options to create their own look.

Since this first iteration, Irving and Nike have continued their collaboration of the brand’s innovative design and the player’s personal style. The latest, the Kyrie 7, dropped in 2020 and shares many features with the original Kyrie 1, though with the addition of an inscription on the heel that pays tribute to late great Kobe Bryant. In between were models like the revolutionary Kyrie 2 (2015), whose design was inspired by motorcycle tires (and which Irving wore to win his first championship with the Cavaliers in 2016). Many shoes in the line have personal touches relating to Irving’s life, like his daughter’s name on the Zoom Air heel of the 2016 Kyrie 3 or the ‘90s-inspired Kyrie 6 released in 2019, whose design was based on shoes Irving wore in the past but with modern touches like 360-traction grip and the same Air Zoom Turbo found on the Kyrie 5s.

The History of the Nike Kyrie