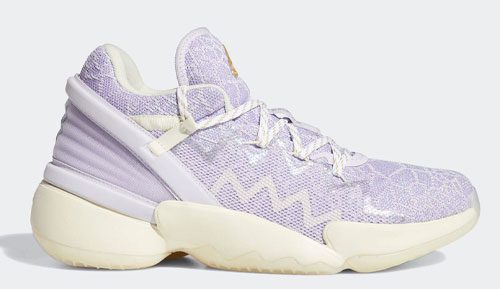 The D.O.N. in the name of Donovan Mitchell’s signature shoe line isn’t based on his first name, it’s short for “Determination Over Negativity.” The young Jazz star aimed for more than just a high-performance sneaker when he released the Adidas D.O.N. Issue #1 in 2019—he wanted his shoes to be a symbol that, as he says, “anything is possible no matter who you are or where you came from” (a big reason he was adamant about keeping the shoe at an affordable price point). The D.O.N. Issue #1 features a herringbone traction ideal for Mitchell’s fast on the court speed, along with a lateral propulsion clip and a range of superhero-inspired colorways, starting with a red-and-blue design based on his Spida nickname. He also released a special “Mailman” colorway of Jazz colors, in tribute to Jazz all-time great Karl Malone.

The D.O.N. Issue #2 was released in 2020 in a similarly fun array of bright colorways. It retained some superhero inspiration, too, with its spiderweb-style traction pattern, along a bouncier, more responsive cushioning and a more rigid heel counter featuring Mitchell’s trademark spider. Mitchell debuted the D.O.N. Issue #3, the latest in the line, during the first round of the 2020-21 NBA playoffs. It adds a full-length Lightstrike cushion and improved traction to the features of previous models, along with the line’s usual array of unique aesthetic touches, like reflective toebox accents and hand-drawn graphics (and, of course, the spider logo).

The History of the Adidas D.O.N.