Jayson Tatum signed with Jordan Brand in the summer of 2019, and he’s been wearing the Air Jordan 34s throughout the season and into the Orlando Bubble.

But Tatum had been a flashy member of the Nike family for his first two seasons in the NBA. One of the Celtics’ brightest stars, Tatum got stares after showcasing a flashy PG2 colorway to start the 2018-19 season, and then stunting the futuristic Adapt BB in the middle of the season. Throughout the lengthy 2018 Celtics playoff run, Tatum was also well-known for wearing various colorways of his teammate’s signature Nike Kyrie 4.

Nike seemed to see a lot of promise in the young star, gifting him with his own Irving-inspired logo early on in his rookie season. But that love seems to have faded somewhat after he split for greener pastures with Jordan. 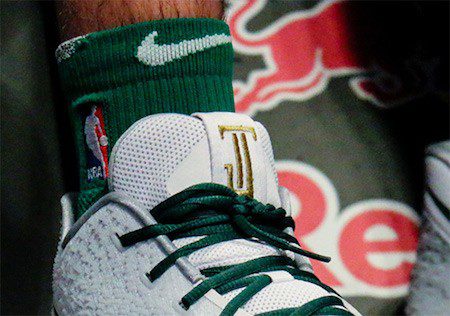 Nike Kyrie 3 with JT logo on the tongue

Skip to the player editions (PEs) and colorways