Last year, we took our first look at the most popular shoes and brands worn by players around the NBA and came to an unsurprising conclusion – Nike absolutely crushes the competition. With 63% of players wearing Nike, it is no wonder that the four most popular shoes worn around the NBA are manufactured by the creators of the iconic Swoosh. However, within this story of domination lies some interesting changes in the NBA sneaker landscape for the 2017-18 season, including the continued rise of adidas, the exciting disruption by upstart brands like Q4 and Big Baller Brand, and the introduction of Paul George’s PG1 as the next great signature sneaker line.

The Most Popular Shoes in the NBA 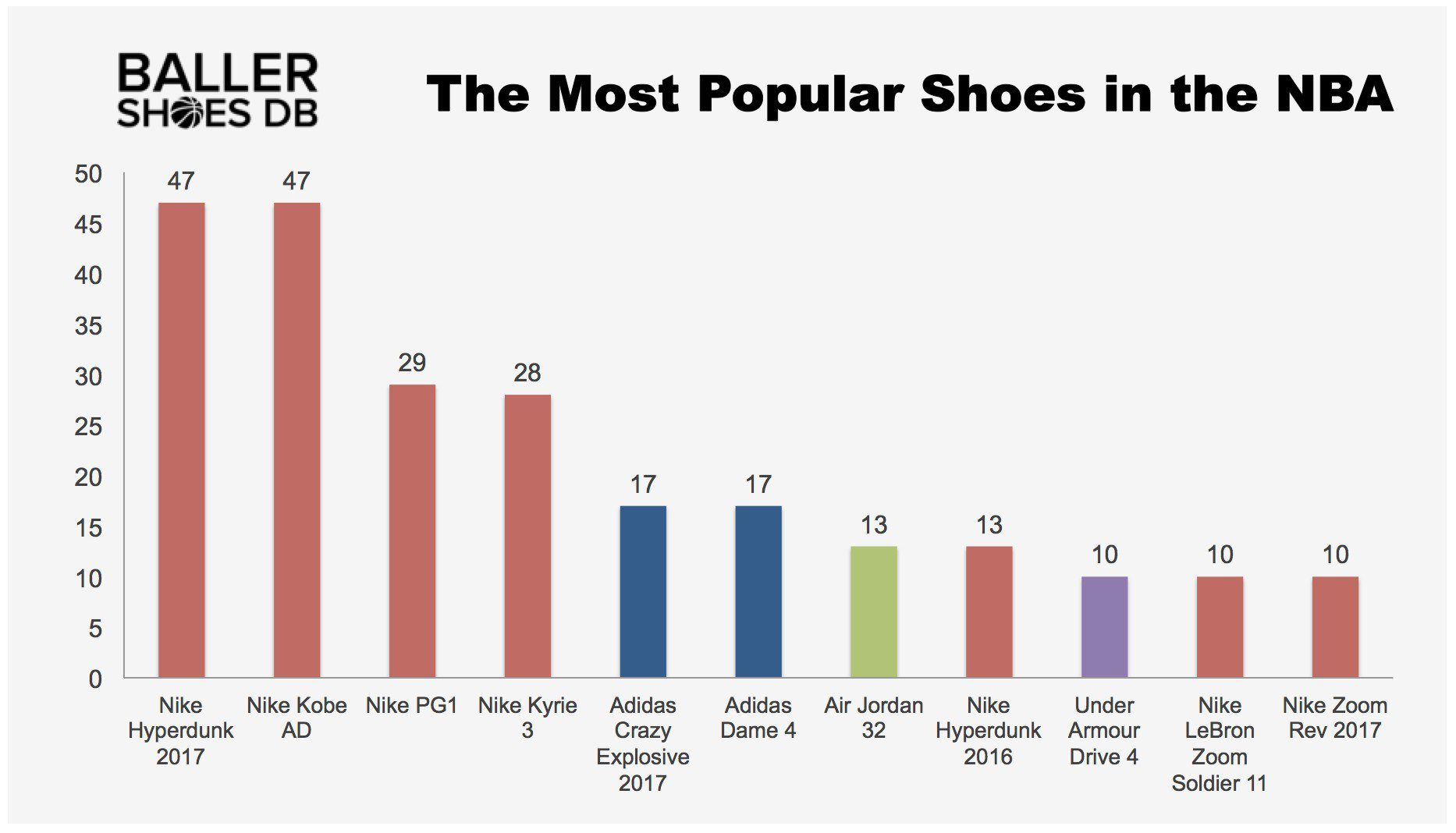 The crown for the most popular shoe in the NBA is shared by two familiar Nike silhouettes: the Kobe AD and the Hyperdunk. At the time of writing, each is worn as the primary shoe of 47 NBA players.

Last year, the Nike Kobe AD, which was the successor to the extremely popular Nike Kobe 11, had only been recently released and yet was the third-most popular shoe in the NBA. This year, NBA players have moved en masse to the Nike Kobe AD Mid, a mid-cut spinoff of the original Kobe AD; stars like Giannis Antetokounmpo and DeMar DeRozan headline Kobe Bryant’s signature line this year.

The Kobe is tied with the next generation in the Hyperdunk line, the Nike Hyperdunk 2017 (whose predecessor was itself the most popular shoe last year). Coming in both a hightop and low version, the Hyperdunk is popular among a wide variety of players and positions, including big men like Karl-Anthony Towns and Marc Gasol, as well as smaller, quicker players like Eric Bledsoe and Bradley Beal.

The battle for third showcases a pair of interesting growth stories, as we see two shoes that have increased dramatically in popularity in a short period of time. The Nike PG1, the signature shoe of Paul George, was worn only by him when our previous list was compiled and yet is now on the feet of a total of 29 NBA players, a massive increase for what has become one of the most well-received new sneakers (both in terms of performance and looks) in the modern era.

Just behind the PG1 is the Nike Kyrie 3, a shoe that has also followed an impressive growth trajectory, going from 15 players last season to 28 this season. The just-released Kyrie 4 looks to be getting some early buzz and may soon take its place on the list.

In fifth place, we finally see a brand besides Nike make the charts, with the Adidas Crazy Explosive 2017. The shoe, which has drawn attention for its unusual sock-like collar and for the young stars who wear it (including Kristaps Porzingis and Andrew Wiggins), has picked up the slack from last year’s Crazylight Boost 2016, which did not see a follow-up model this season.

Tied with the Crazy Explosive is the Dame 4, the latest and most highly touted shoe from Damian Lillard and Adidas. Rookie sensation Donovan Mitchell has been wearing what are perhaps the most eye-catching pair of Dame 4s on the hardwood.

The Most Popular Shoe Brands in the NBA 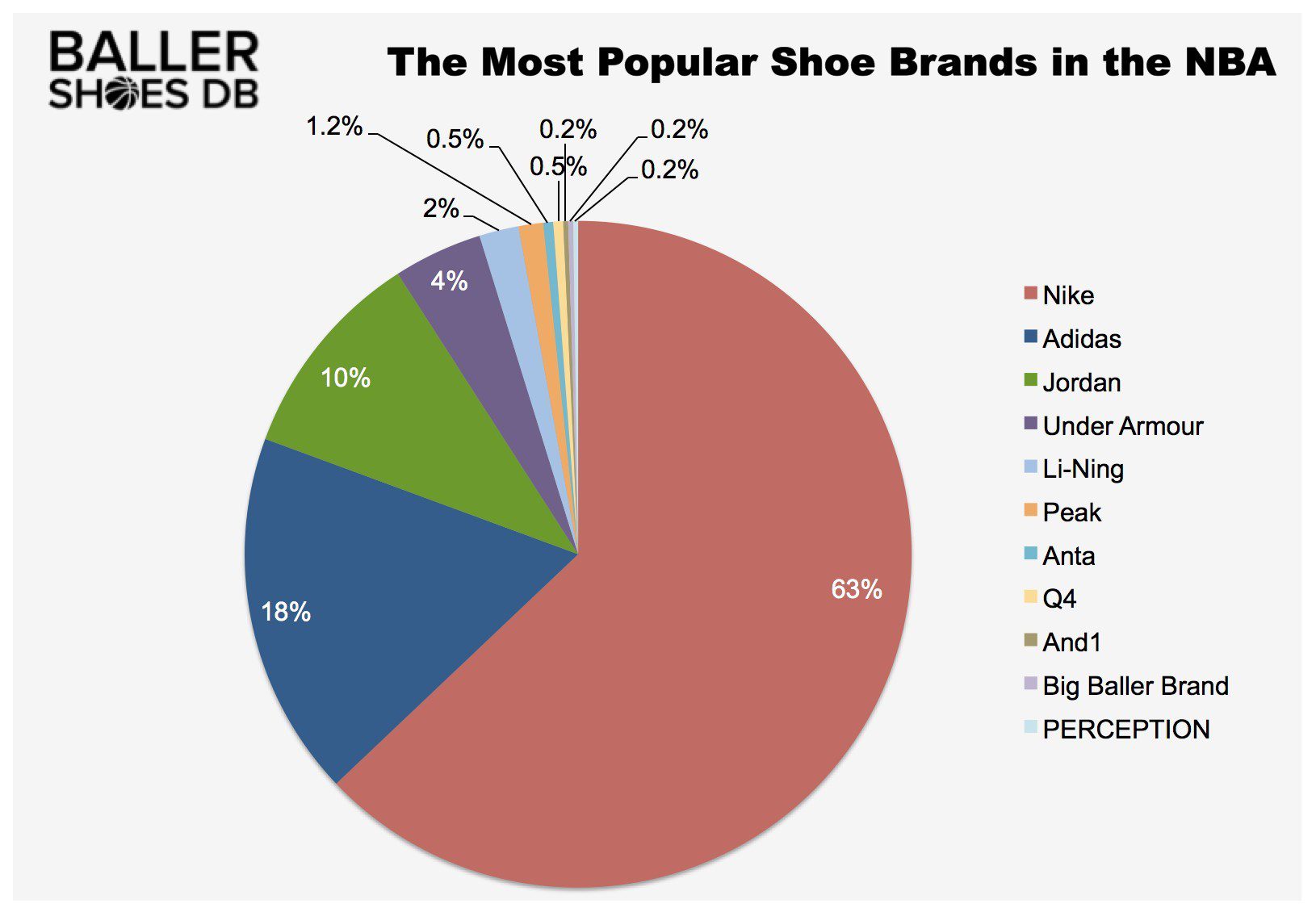 When we look at the most popular brands, we see some familiar faces followed by interesting upstarts. As mentioned at the top, Nike dominates the list at 63%, followed by Adidas (18%) and Jordan (10%). However, the smaller industry players are starting to grow and new brands are appearing on the scene.

Under Armour (4%)  grew the number of players wearing its shoes by 50%, going from 12 to 18, an impressive rise for a company that had no presence in the NBA prior to signing Curry in 2015. UA, who is looking to expand its star wattage, scooped up promising rookies Josh Jackson and Dennis Smith Jr. at the outset of the season. Interestingly, UA’s only signature shoe, the Curry 4, is worn as the primary sneaker by only six of its players under contract, with the Drive 4 attracting most of its players’ interest.

Li-Ning (2%), the Chinese manufacturer of Dwyane Wade’s signature shoe, the Li-Ning Way of Wade 6, also grew, adding two new players to its stylish line of shoes, including prolific scorer CJ McCollum. Besides the Way of Wade, many of Li-Ning’s players prefer the Li-Ning Power 4 and the Li-Ning YuShuai 11 silhouettes.

Peak (1.2%), another Chinese brand, is found on the feet of five players (including Dwight Howard with his signature Peak DH3, and Lou Williams who is the face of the Peak Streetball Master), while Anta (0.5%) is struggling to stay relevant with just two ballers (including Klay Thompson).

The Little Guys With The Interesting Stories

The final four shoe brands on the list have a combined total of five players wearing them but each one has a unique story.

Newcomer Q4, a Los Angeles-based company, is the first American entrant to the market since Brandblack signed (and then subsequently lost) Jamal Crawford. Although they were only founded in June 2017, they were able to sign both Langston Galloway and E’Twaun Moore this season and have promised to grow their brand in the coming years.

Another newcomer to the scene, Big Baller Brand, has quite a different origin story. Repped by only a single player, Lonzo Ball, its current shoe, the ZO2 Prime Remix, has drawn significant attention from sneakerheads for its price point (it starts at a whopping $495), its fumbled rollout (the original shoe, the ZO2 Prime, was not quite ready for primetime and was replaced before it was even released) and of course the antics of the company’s founder, family patriarch Lavar Ball.

A second single player company, AND1, is headed in a different direction. Popularized by Allen Iverson in the early 2000s, the company exploded onto the scene before quickly fading by the early 2010s. Were it not for the surprising story of G League sensation Sean Kilpatrick, who was awarded his own signature shoe in the offseason, AND1 would have zero current NBA players under contract.

Finally, we must mention PERCEPTION, the shoe and shoe brand, that you’ve likely never heard of. Founded by current NBA player Spencer Dinwiddie, it is questionable whether the PERCEPTION brand will ever see the light of day (he actually wears the Hyperdunk on a daily basis). Still in its concept form, Dinwiddie has vowed to take his shoe to the mass market by mid-2018, a plan that seems like a longshot given that he currently has a full-time job in the NBA and no previous shoe manufacturing experience.