The NBA was back in full swing for its 76th season, playing a full 82 game schedule for the first time since 2018-19. While the sport returned to normal after two years of pandemic adjustments, the same can’t be said for the sneaker world. Rookies in particular found it a tough year to ink endorsement deals. Top prospects like #1 pick Cade Cunningham and Rockets shooting guard Jalen Green started their season with big-name, big-money shoe contracts, but only a quarter of players drafted in 2021 inked an endorsement, and many players this season took to the court just wearing their favorite sneakers.

Among those favorites are the Kobe 5 Protro and Kobe 6 Protro – retro versions of Kobe Bryant’s most well known shoes – though these, too, are harder to come by than they used to be. The late basketball great’s widow Vanessa Bryant chose not to renew the estate’s contract with Nike, halting the release of new Kobe sneakers. This has left both players and sneakerheads scrambling to get their hands on these popular shoes. Smaller brands and legacy brands have been angling to fill that void, leading to a more diverse sneaker landscape than the Nike and Adidas dominated market familiar from past years.

Our rankings are based on the exhaustive Baller Shoes DB database. While some players try different shoes throughout the season, most use a single one as their primary shoe (even if they change colorways), and that is what we use to compute our rankings. 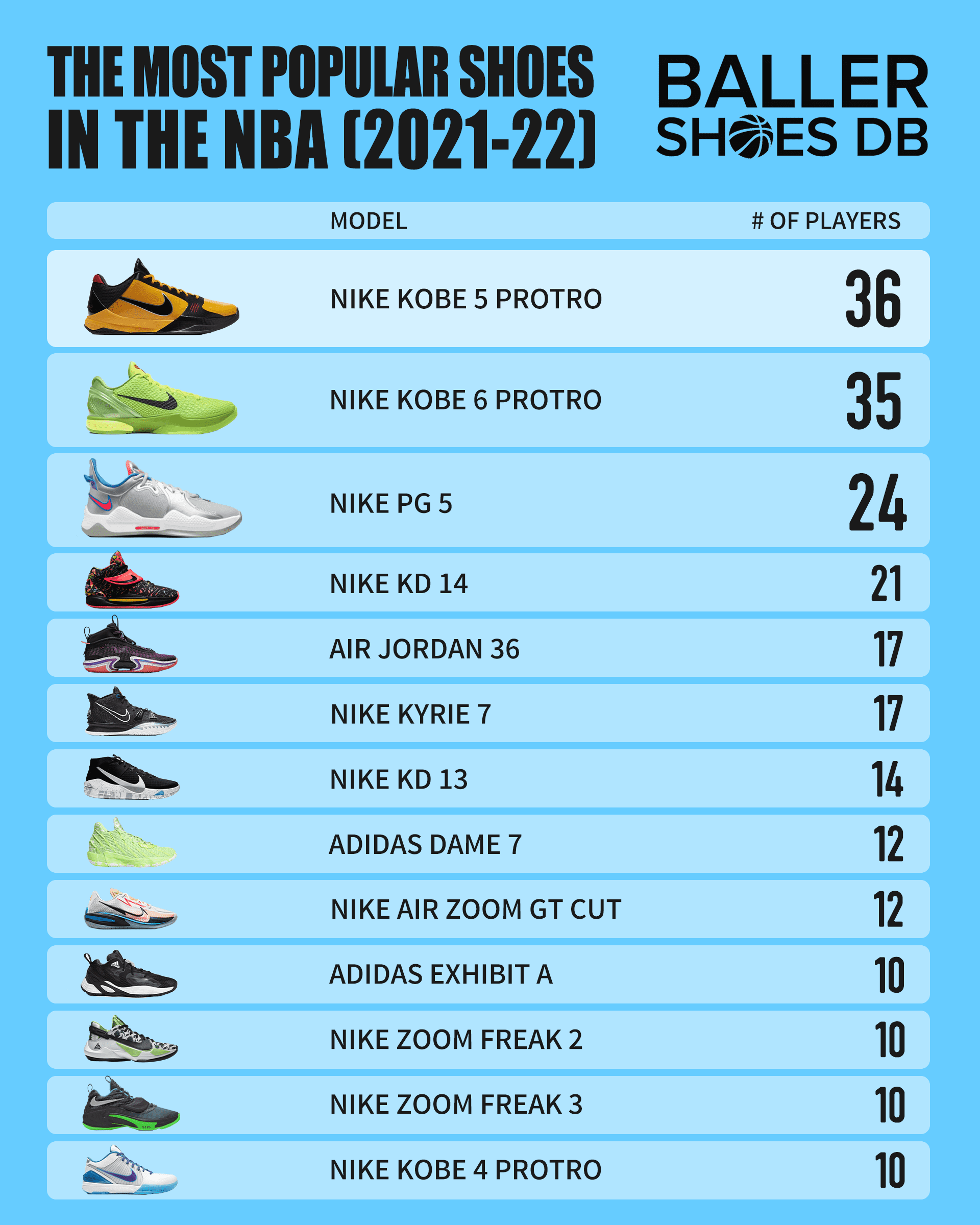 While fewer players are releasing signature shoes from Nike, the brand continues to dominate the rankings, with the Nike Kobe 5 Protro holding the #1 spot for the second straight year, worn by players like Zach LaVine and Jaylen Brown. The Nike Kobe 6 Protro and Nike PG 5 round out the top 3. Familiar silhouettes like the Nike KD 14, Nike Kyrie 7, and Giannis Antetokounmpo’s signature Nike Zoom Freak 2 and 3 remain popular, too, demonstrating the brand’s continued domination of the basketball shoe world.

Only 3 non-Nike shoes made the top 10 this season: the Air Jordan 36 made its first on-court appearance when Jayson Tatum wore a pair in round 1 of the 2021 playoffs. The Adidas Dame 7 – which has been updated to the new EXPT colorway – rose to the 8th spot in the rankings after coming in 15th last season, while the Adidas Exhibit A is favored by players like Anthony Edwards for its Lightstrike midsole and dynamic response.

Kobe Bryant’s shoe lines continued to dominate the league this season, driven largely by the popularity of the Protro 5 and 6. Despite the Bryant estate’s choice not to renew their Nike contract (until very recently), no other signature lines have stepped up to match their performance, and Kobe’s signature sneakers are still worn by nearly twice the number of players as Kyrie Irving’s (and more than Irving and Kevin Durant’s lines added together). 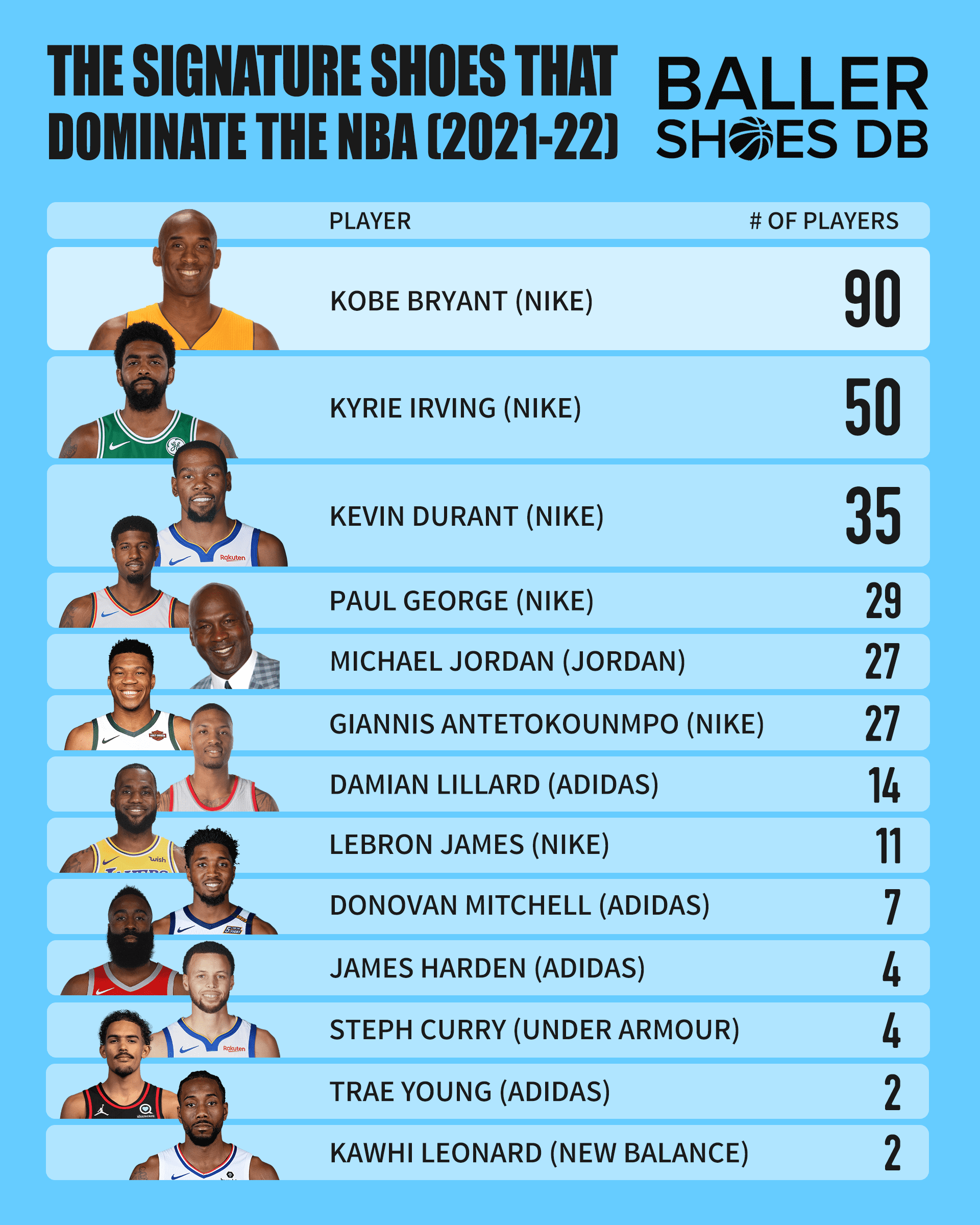 Though his shoes may not be quite at Kobe levels of popularity, Kyrie Irving has shown staying power with the Kyrie 7 and companion Kyrie Low 4, whose combination of speed, support, and control make it a favorite choice across positions. Kevin Durant rose to the third position this year, thanks largely to the KD 14 Nike released last year, though the previous KD 13 remains a favorite choice among a wide variety of players, as well.

This season also saw some previously popular shoe lines falling out of favor, particularly players who partner with Adidas. While Damian Lillard’s Dame 7 remains the most-worn Adidas shoe on the court, the more recent Dame 8 hasn’t attracted the same following as previous iterations. The same is true of the Adidas Harden Vol. 6, released in February 2022 to less acclaim than the 2021 Vol. 5. James Harden donned the Harden Vol. 6 for his first full season with the Brooklyn Nets (and now 76ers), but few of his fellow players are following suit.

With roughly 2/3 of NBA players wearing their footwear, Nike has continued to be the dominant brand of the league this season. That becomes even more stark when you add the Air Jordan subsidiary, with the two together accounting for nearly 75% of all shoes worn on-court. Adidas has continued to hold steady, however, worn by about 10% of the league’s players, a slight increase over last year’s stats. 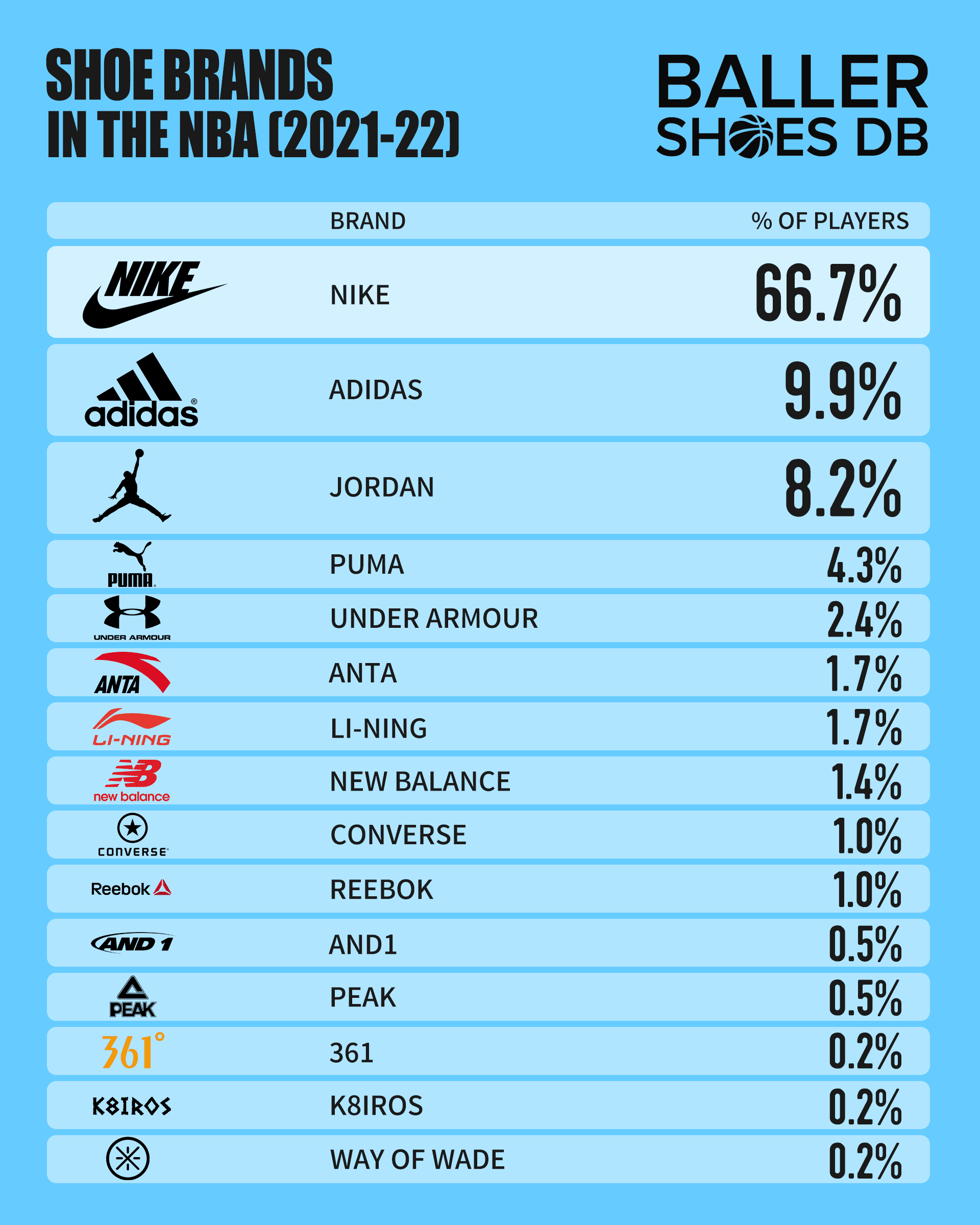 Among smaller brands, Converse and Anta made the strongest gains, albeit modest ones compared to the top three powerhouse names. Draymond Green has been with Converse since 2020, and unveiled a new version of his G4 signature shoe in a Christmas Day game against the Phoenix Suns, continuing the brand’s mini-resurgence as an on-court option. Anta’s biggest pickup this year was the Clippers’ Terance Mann, who inked his first shoe deal with the Chinese sports equipment company this year, joining players like Klay Thompson and Gordon Hayward.

These aren’t the only smaller brands building their catalog. CJ McCollum has been headlining the Li-Ning brand since 2018, and this past fall launched his first signature shoe with them, the CJ1, making him the first athlete to have a signature line with Li-Ning since Dwyane Wade. Another Chinese brand, 361, signed a deal with Aaron Gordon in 2020 after he parted ways with Nike, and Gordon plays in his signature 361 AG 2 this season. Puma also made a historic move this year by signing 17-year-old Mikey Williams, the first American high school player in history to sign a shoe deal. Though Williams is still a year away from draft eligibility, Puma is banking on his notoriety on social media, along with his status as a rising star of the sport, to give them a stronger foothold in the market in the future.

American brand And1 returns to the brand ranking list this year after missing it in the 2020-21 season. With Kevin Garnett as their Creative Director, it’s no surprise they’re gaining popularity, with the 2020 And1 Attack 2.0 worn most prominently by Clippers guard Norman Powell. The Peak brand has also been holding steady, with the Warriors’ Andrew Wiggins serving as their main spokesperson since landing a shoe deal with the brand ahead of the 2020-21 season.

With signature shoe contracts in short supply from the big brands, some players have taken matters into their own hands. Langston Galloway unveiled his Ethics LG One signature during the 2021 NBA Finals, officially launching his own sneaker company. While this nascent brand hasn’t gotten much traction among other players yet, it’s one to keep an eye on in coming seasons, and makes him the latest player to jump ship from the Q4 Sports brand. Dwyane Wade, meanwhile, has taken a page from Steph Curry’s book, using his long-time partnership with Li-Ning to launch a spin-off brand, Way of Wade, which released five new sneakers in 2021, including the All-City 9 and Fission 7.