After a Covid-ravaged 2019-20 NBA season that saw a full league shutdown in March followed by a strange but successful basketball “bubble” in Disney World, footwear was way down the priority list in the basketball world. The big shoe companies like Nike and Adidas laid low in late 2020 — usually a time when they scoop up promising rookies for lucrative endorsement deals — and asserted they would sign no new players until 2021. Highly anticipated signature shoes like the Harden Vol. 5 and the Kyrie 7 had their release dates delayed, due to major doubts about whether Covid-weary consumers would open their wallets for new expensive sneakers. And with Kobe Bryant’s death still fresh in the minds of the basketball world, the future of Kobe’s eponymous shoe line with Nike was cloudy.

Eventually, the NBA sprang back to life, and with it came a parade of new signature shoes and colorways, an aggressive push from smaller footwear brands, and a renewed interest in the shoes of NBA stars.

Our rankings are based on the exhaustive Baller Shoes DB database. While some players try different shoes throughout the season, most players use a single one as their primary shoe (even if they change colorways), and that is how we compute our rankings. 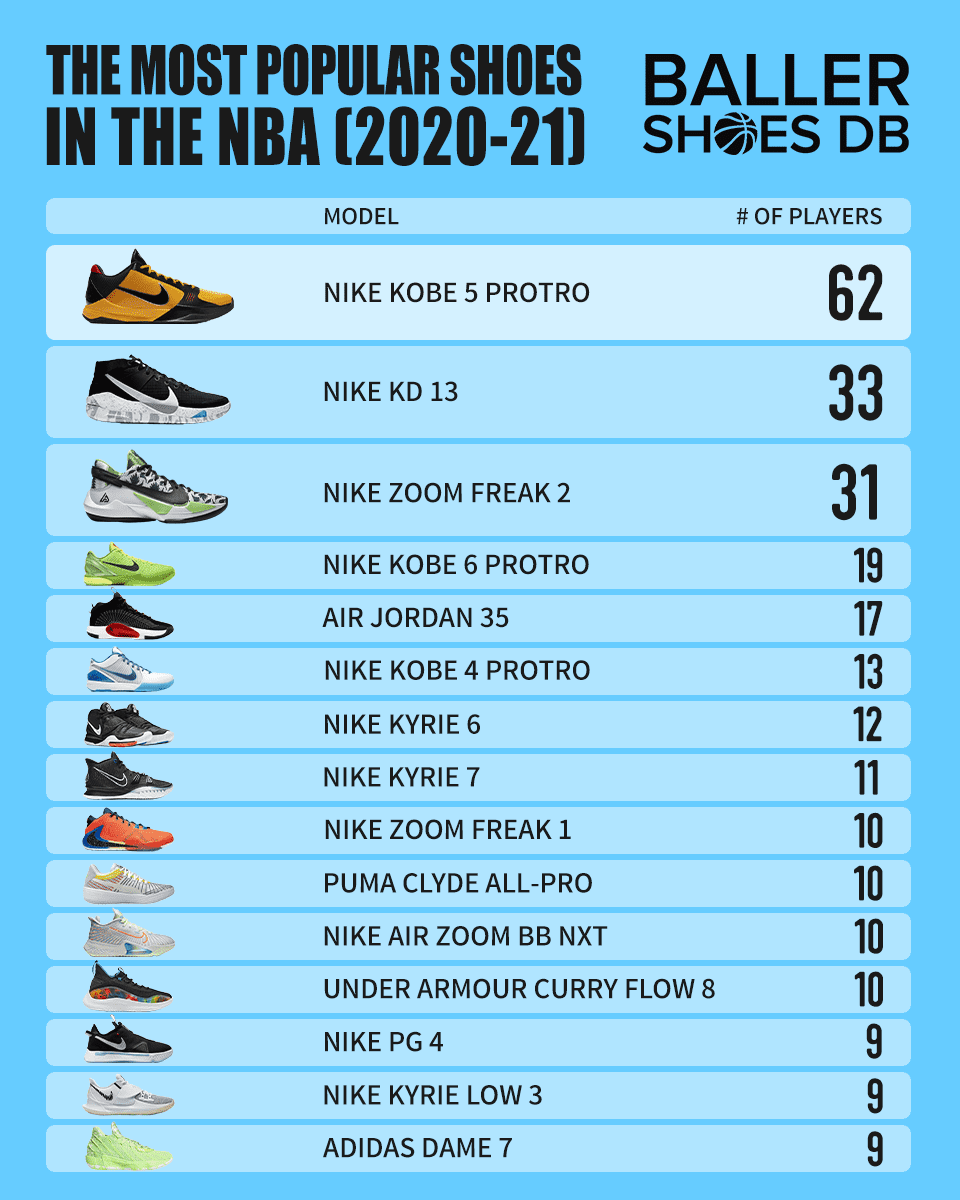 While the world, and the NBA, have changed in many ways over the past year, the pecking order of basketball’s most popular shoes has mostly stayed the same. This year’s three most most popular sneakers — the Nike Kobe 5 Protro, Nike Zoom Freak 2 and Nike KD 13 — look mighty similar to last year’s list — Nike Kobe 4 Protro, Nike KD 13 and Nike Zoom Freak 1 —  which speaks to the tight grip that Nike holds over the sneaker world, and the excellent performance and aesthetics of Kobe, Giannis and KD’s signature lines.

Further down the list are more familiar silhouettes, including Kyrie’s signature shoe (both the 6 and 7 are still commonly worn), the flagship Air Jordan 35, and Puma’s annual showcase silhouette, the Clyde All-Pro. But perhaps most noticeable is the appearance of not one but two additional Kobe Protro models, the 4 and the 6, which NBA players at all positions love as their primary (and often secondary) shoes.

If you considered Kobe’s shoes to be merely popular last year, then this year his signature line outright dominated the league. His shoes — which span the Protro, original and Mamba lines — are worn by more than double the number of players of the next signature athlete (Kyrie Irving), and by more than the total of the signature athletes in positions 3 through 5 (Giannis, KD and Michael Jordan). In part, this trend was certainly a response to Kobe’s tragic death in early 2020 but by equal measure, Kobe’s shoes are universally adored for their unmatched performance features and pleasing low-cut aesthetic. But next year, things get complicated: with Kobe’s wife electing not to renew his endorsement deal with Nike, there will be no new Kobe shoes released, and players will need to decide whether to wear his previously released sneakers or move on altogether. 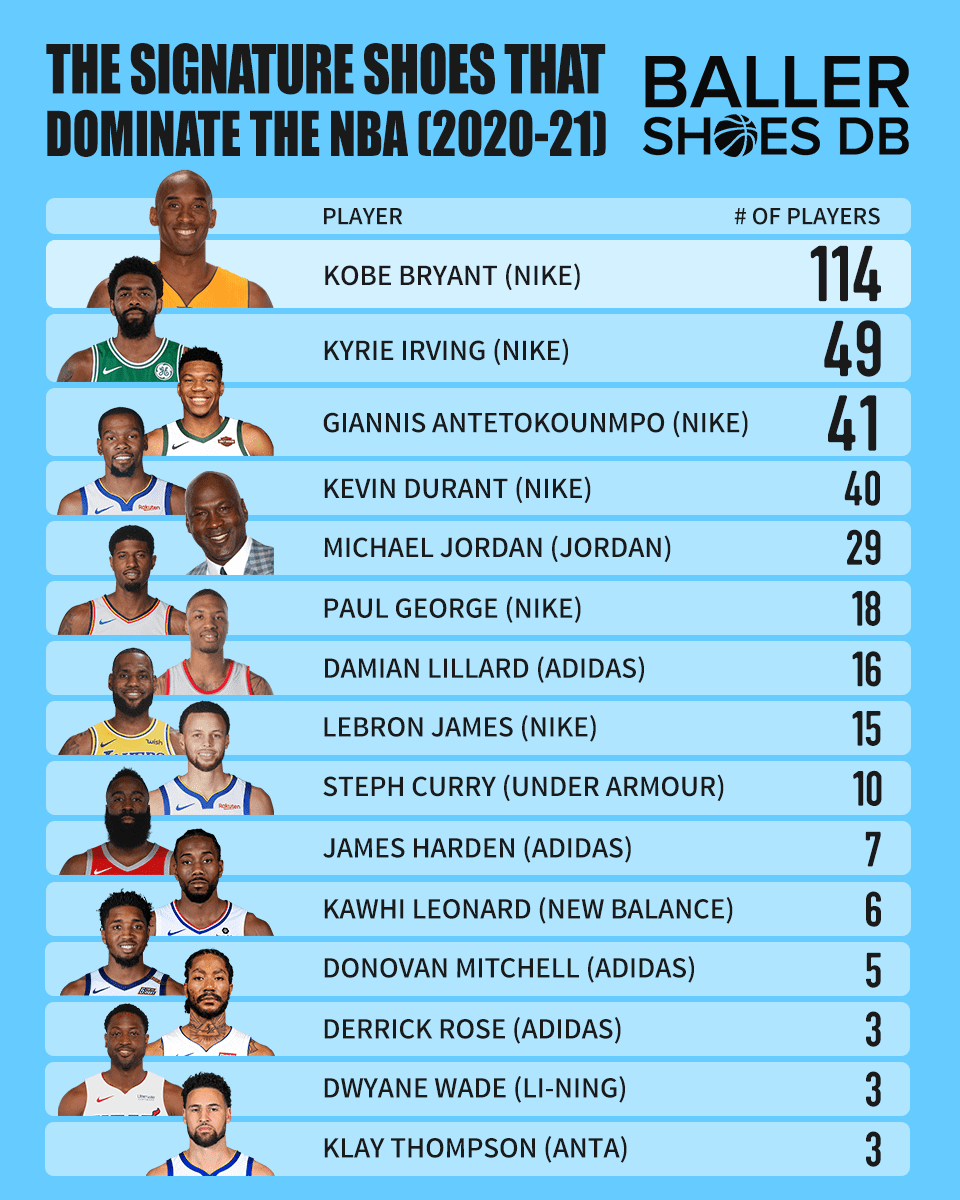 Beyond Kobe, it was Giannis who showed staying power near the top of his list, with his Zoom Freak line continuing to be worn by players across the league, and at each position. Damian Lillard also showed some renewed strength, with his Dame 7 shoes being far more well-received in basketball circles compared to the less successful Dame 6s.

But perhaps most surprisingly, the biggest downward movement came from Paul George. With less than stellar outings from Nike with the PG 4 and PG 5 silhouettes, there’s been a serious drop in the number of players wearing his shoes. Even for players who stay faithful to PGs, they often wear his outstanding older sneakers, particularly the PG 1s and 2.5s. Paul George himself appears to agree with the rest of the league as even he has frequently worn his earlier models rather than his newest (and less visually appealing) PG 5s.

The big 3 of Nike, Adidas and Jordan Brand (a subsidiary of Nike) showed no signs of giving away their dominant positions in the league, with over 87% of the league’s players sticking with the basketball shoe blue bloods.

The second tier brands, like Puma, New Balance, Converse, all made modest pushes to gain a stronger foothold in the league, each signing a handful of big names to broaden their appeal. Puma likely bagged the biggest star in the rookie class with LaMelo Ball, New Balance scooped up Denver star Jamal Murray, and Converse snagged promising youngster and fashion hound Shai Gilgeous-Alexander.

What About the Tiny Brands?

When LaMelo signed with Puma, the death knell finally sounded for Big Baller Brand, the once brash and exciting brainchild of LaVar Ball (maybe it never had a chance in the first place?). Other small brands have similarly struggled. Legendary streetball outfit AND1, which made some noise with several signings in the past few years, is close to folding up shop after Fred VanVleet fled for Chinese brand Li-Ning. Classic sportswear company FILA tried to stay relevant by partnering with journeyman DJ Augustin, but he also moved on to greener pastures. The Chinese brands — Anta, Peak and Li-Ning, along with newcomer 361 Degrees — continue to invest money in NBA talent (Andrew Wiggins joined Peak, while CJ McCollum released a signature shoe with Li-Ning), but it’s tough to see them making a more significant dent in the NBA shoe world.

Finally, a few tiny brands are still plugging away, trying to make a dent in the huge basketball shoe market. Chinese brand 361 Degrees previously had exciting outsider Jimmer Fredette on a contract, but with Fredette’s inability to crack an NBA roster, the company swooped in and signed dunker extraordinaire Aaron Gordon. Boutique American brand Q4 used to have a group of four NBA players on its roster, but as of writing, only Langston Galloway remains, and he wears the little-known Q4 The Specialist silhouette.