If last season — with the loosening of shoe color restrictions, the return of legacy brands like Puma, New Balance and Fila, and the epic drama of Big Baller Brand — seemed like a big year for stories in the NBA shoe world, then this year took the shoe world to a different level. And that’s even setting aside the decision to suspend and potentially cancel the entire season due to the coronavirus pandemic, which has wreaked havoc on the billion dollar basketball shoe market.

In mid-2019, some familiar legacy brands decided to jump in and make their own comebacks, with Converse and Reebok each signing NBA players and trying to get back a piece of the performance shoe pie. Zion Williamson, who had surprised some by signing with Jordan Brand after being drafted first overall, finally made his debut in January and has let his amazing PEs (and his game-changing plays) do the talking. And the epic battle between Montrezl Harrell and PJ Tucker to be crowned sneaker king of the NBA continues unabated.

But the biggest sneaker news was also the saddest, with the tragic passing of Lakers great Kobe Bryant. For many years, Kobe’s signature shoes have been the most popular kicks worn by players in the NBA, appreciated by players at every position. Their slim, low profile, high performance components and appealing looks have been irresistible to Nike’s massive group of NBA players, and the release of the new “Protro” line of retros has introduced a new generation of ballers to Kobe’s best signature shoes.

Kobe dominated the league, and his shoes will surely continue to dominate on the feet of NBA players for years to come.

Our rankings are based on the exhaustive Baller Shoes DB database. While some players try different shoes throughout the season, most players use a single one as their primary shoe (even if they change colorways), and that is how we compute our rankings. 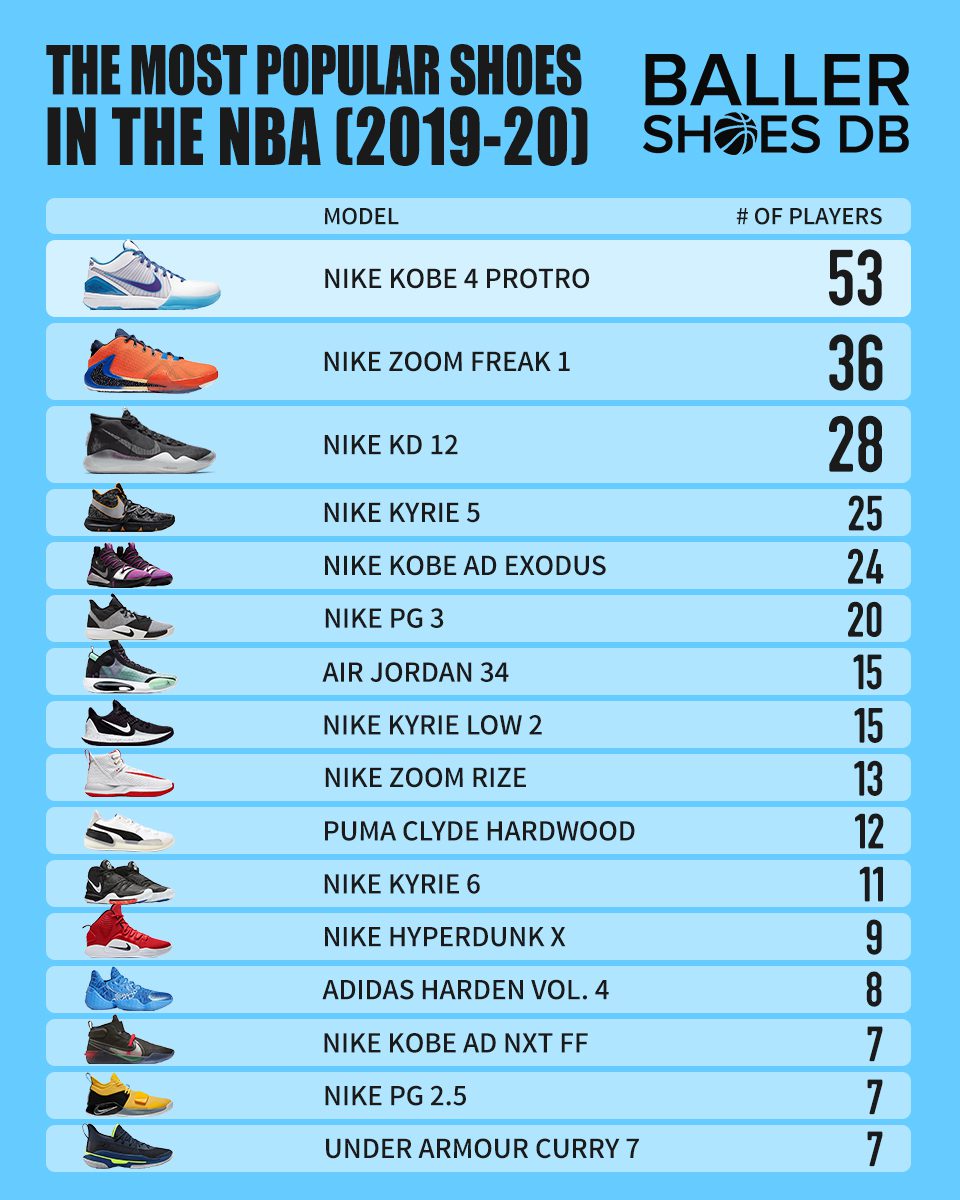 Whereas the last several years saw the Hyperdunk silhouette top our list, this year the Hyperdunk is no more, replaced in Nike’s catalogue by the much less popular Nike Zoom Rize and Nike AlphaDunk. Taking the crown at #1 is the Nike Kobe 4 Protro, an updated version of the extremely popular Kobe 4, first released in 2008. The shoe is worn by everyone from scoring guards like Norman Powell and Devin Booker to bigs like Anthony Davis and Domantas Sabonis.

Debuting on the list at #2 is Giannis Antetokounmpo’s maiden signature shoe, the Nike Zoom Freak 1. Low cut and clearly inspired by the Kobe line, the Zoom Freak 1 has been incredibly successful for a first signature shoe, and is worn by many solid, but perhaps not All-Star, calibre players, like Tyler Herro, Nikola Vucevic, Malcolm Brogdon, as well as Giannis and his two brothers, Kostas and Thanasis (having brothers in the NBA certainly helps juice those numbers!)

Coming in at #3 is the Nike KD 12, the signature shoe of injured Nets star Kevin Durant. Despite being out all season, KD makes great shoes with Nike, and NBA players of all stripes love to wear them. Some interesting players who have chosen the KD 12 this season include Pascal Siakam and Jaren Jackson Jr.

Notable shoes further down the list include two additional Kobe models (the older Kobe AD Exodus and the new Kobe AD NXT FF), as well as the Kyrie 6, whose ranking is hurt because many Kyrie-lovers are choosing to stick with the older Kyrie 5 model, and even the Kyrie 4.

Just because you’ve got a signature shoe, it doesn’t mean that many players will wear it. Well, unless your name is Kobe or Kyrie, that is. Signature shoes from these two account for more than half of all Nike shoes on court, and about a third of shoes on court in the NBA overall.

The most notable drop from years past is Paul George, whose Nike PG 3 shoes seem a bit less exciting to his NBA colleagues than his past shoes, which included the high performing PG 2s and PG 2.5s.

The Legacy Brands Keep on Coming

Last year it was Fila, Puma and New Balance turning back the clock. This year, two more legacy brands have joined in on the fun. In the 2018 offseason, Kelly Oubre Jr. turned heads by signing with Converse, promising to wear Converse streetwear off the court. But this season, he also debuted a brand new Converse silhouette on the court, the All Star Pro BB. Since then, Converse has added Draymond Green to its stable of athletes, and have released a second silhouette, the G4. Expect Converse, a subsidiary of Nike, to continue scooping up players in the next several years. 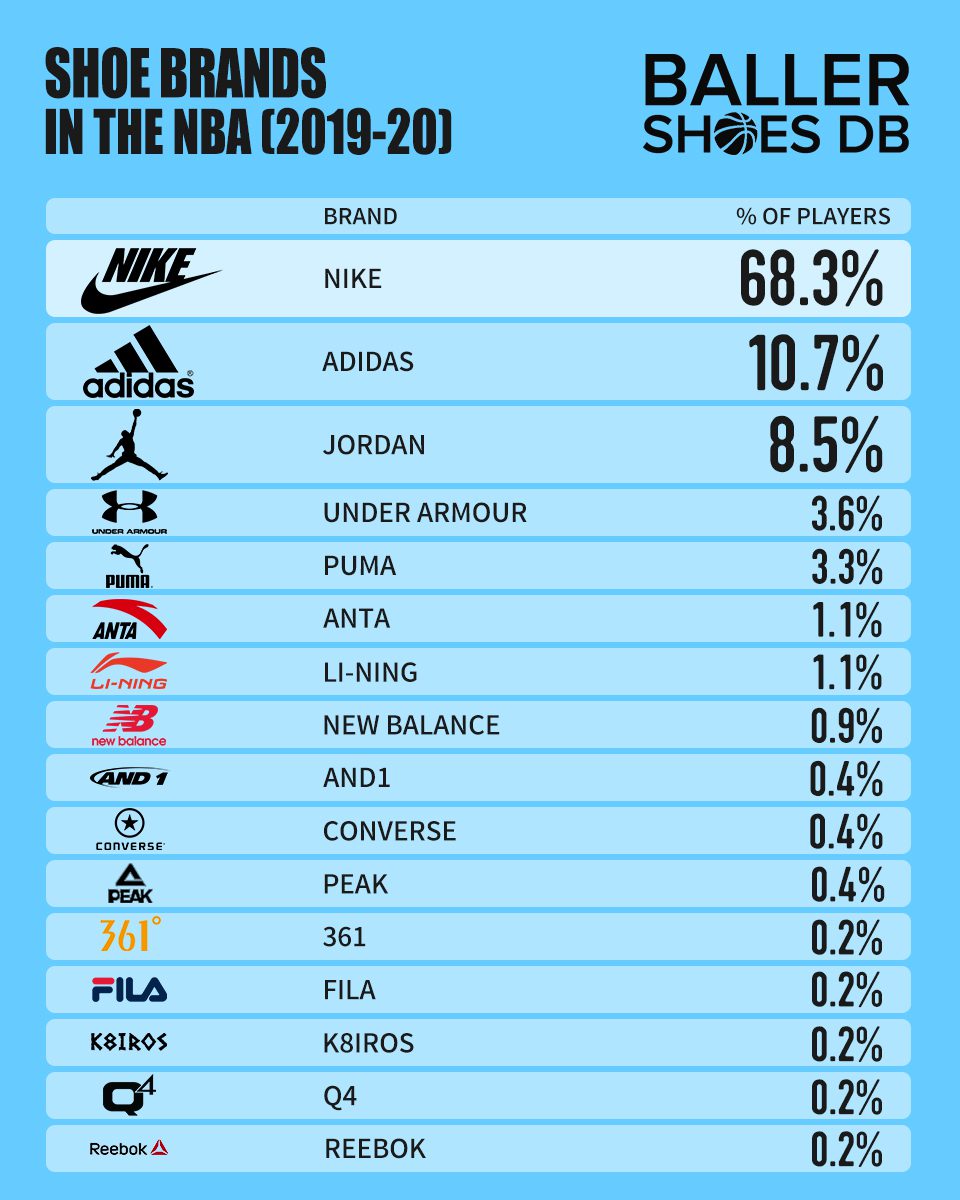 Most surprisingly, Reebok, who hasn’t made a memorable shoe for basketball or any other sport for many years, decided to dip its toe back in the water by signing Josh Richardson. The 76ers sharpshooter has been wearing Allen Iverson’s signature Question silhouette this season, though it’s unclear whether Reebok will make any new performance shoes or just rely on its back catalogue.

The last couple of seasons have been fun for sneakerheads, with fresh brands coming into the league to shake things up. While Big Baller Brand and the LaVar Ball show was entertaining, it appears that BBB is finally down for the count (Lonzo Ball’s signature shoe apparently couldn’t even stay together for more than a quarter).

New Balance is back in the game, but has had something of a curious business strategy. While critics have praised the aesthetics and build of Kawhi Leonard’s signature OMN1S, the shoe had been virtually impossible to purchase. With the Raptors title run in 2019, Leonard’s shoes were on national TV several times a week over several months, and New Balance clearly missed an opportunity to make a boatload of money from this exposure.

Finally, a few tiny brands are still plugging away, trying to make a dent in the huge basketball shoe market. Chinese brand 361 Degrees previously had exciting outsider Jimmer Fredette on a contract, but with Fredette’s inability to crack an NBA roster, the company swooped in and signed dunker extraordinaire Aaron Gordon. Boutique American brand Q4 used to have a group of four NBA players on its roster, but as of writing, only Langston Galloway remains, and he wears the little-known Q4 Specialist silhouette.