The world of basketball shoes got a lot more interesting this year, with the return of old-school brands like Puma, Fila and New Balance, and a loosening of the apparel rules in the NBA that allow players to wear whatever colorways they want on the hardwood.

Our rankings are based on the exhaustive Baller Shoes DB database. While some players try different shoes throughout the season (PJ Tucker and Montrezl Harrell are notable examples), almost all NBAers use a single one as their primary shoe, and that is how we compute our rankings. 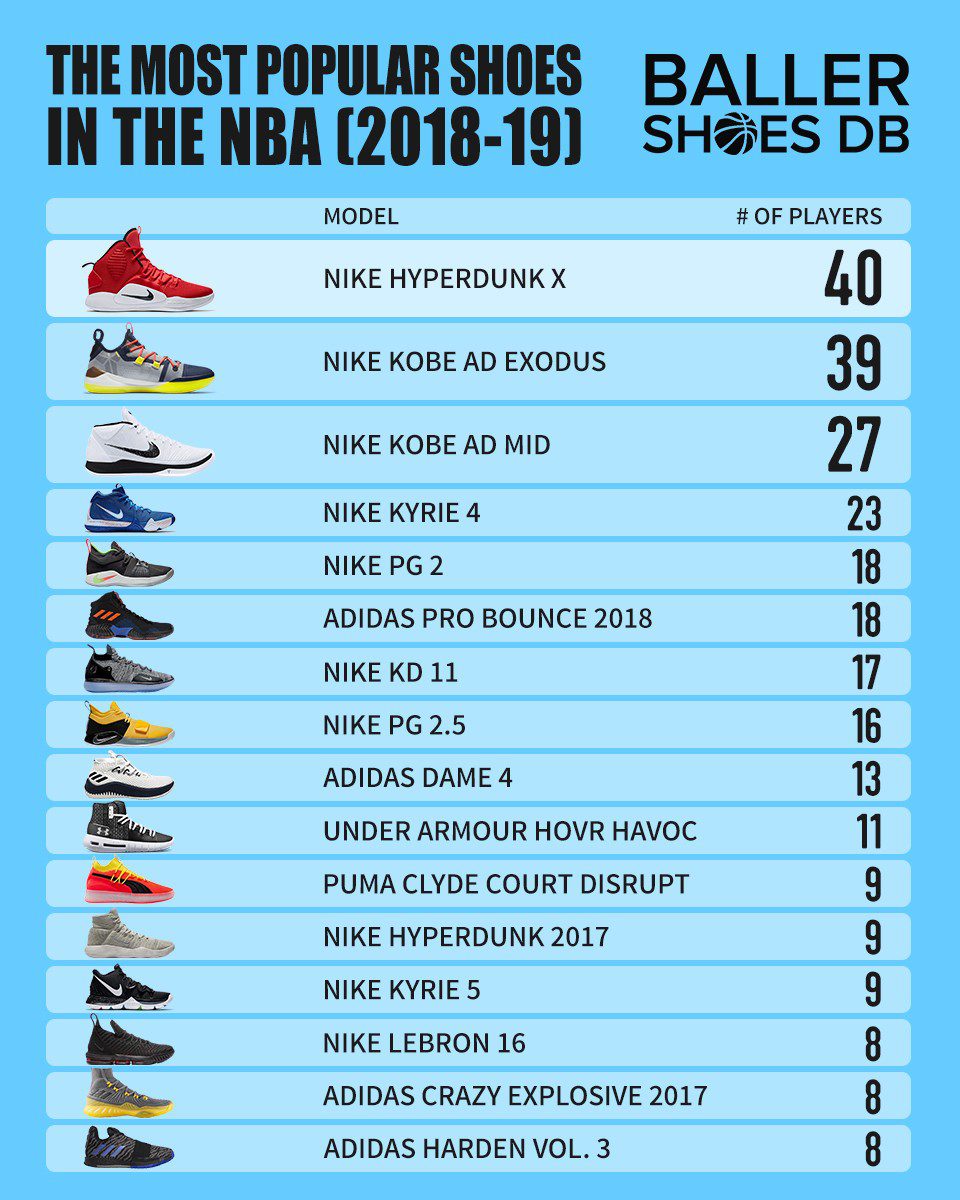 At the top of our list, the hightop Hyperdunk X is preferred by some of the league’s dominant big men like Karl-Anthony Towns and Ben Simmons, while the lowtop version is preferred by quicker guys like Bradley Beal and Luka Doncic. The Kobe AD is the NBA’s jack-of-all-trades, worn by players at all positions, including Giannis Antetokounmpo, Kyle Kuzma and Clint Capela.

With the loosening of the color rules, we’ve also seen players spreading their wings and exploring a much wider variety of shoes than before, with the popular shoe list looking much less top-heavy than in years past. Following the Hyperdunk and Kobe AD Exodus is the Kobe AD Mid (27 players), a model from last season which is still popular among starters and rotation players like Domantas Sabonis and Joe Ingles. Further down the list are popular silhouettes like Kyrie Irving’s Kyrie 4 (at the time of writing, the Kyrie 5 is still picking up steam among players), Paul George’s PG 2 and PG 2.5 (which most famously exploded on the feet of Duke’s Zion Williamson), Adidas’ top-ranked Pro Bounce 2018 (Ricky Rubio, Eric Gordon, Steven Adams), and Under Armour’s top-ranked HOVR Havoc (Joel Embiid and Josh Jackson).

Just because you have a signature shoe, it doesn’t mean that a lot of your fellow NBAers will actually wear it. By far, the most popular signature shoes are from Kobe Bryant, followed by Kyrie Irving, Paul George, Michael Jordan (mostly the Air Jordan 32, 33 as well as retro models), LeBron James (the LeBron and Soldier lines) and Kevin Durant. After that, there’s a steep drop-off, and some might be surprised to learn that all-NBA superstars like James Harden (the Harden Vol. 1-3), Steph Curry (the Curry and Curry 3Zero), Russell Westbrook (the Jordan Why Not Zer0) and Chris Paul (the CP3) just don’t get a lot of love from their fellow players. 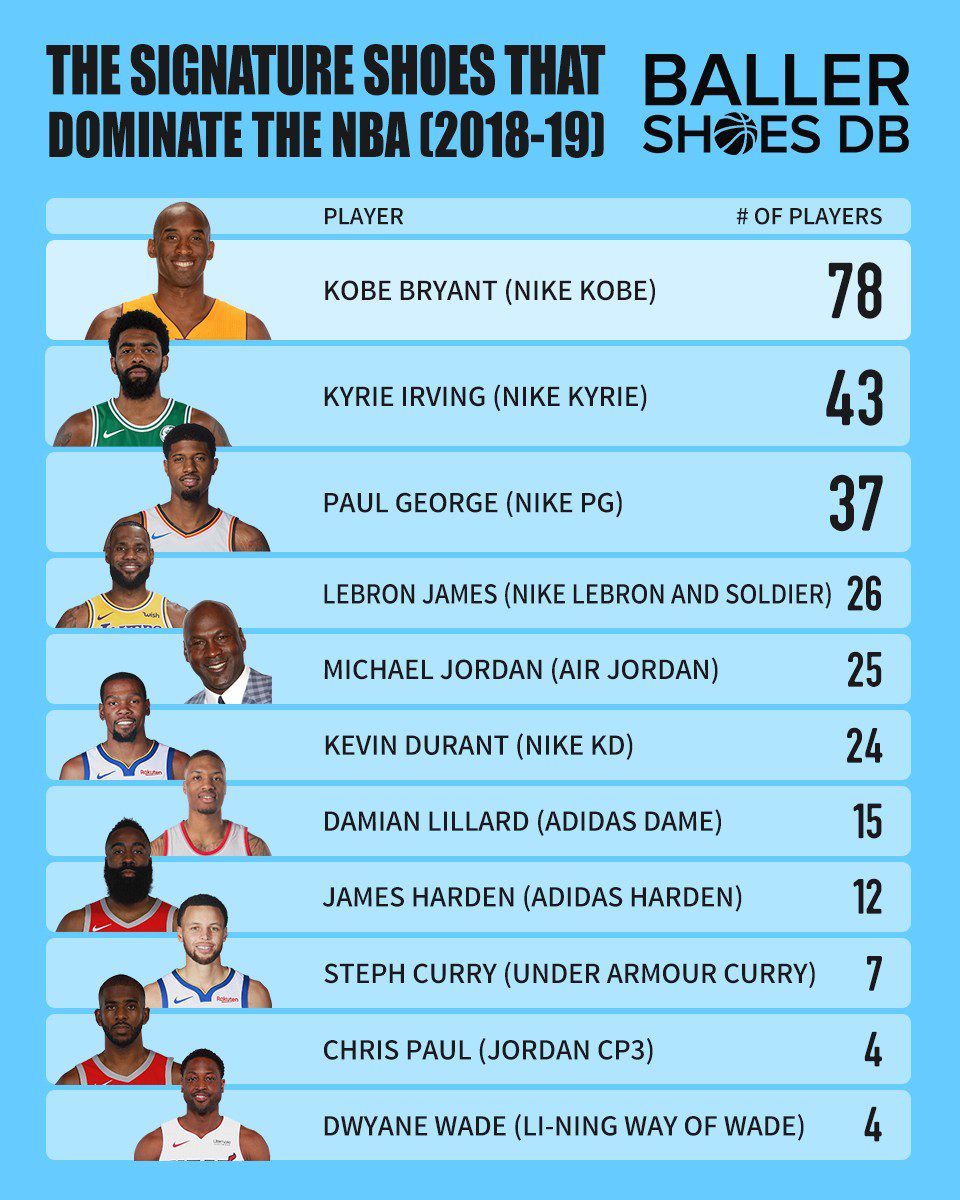 After last year’s mixed debut of the Ball family’s Big Baller Brand shoe, it was unclear whether there was room for new brands to muscle their way into the league. Oh, how wrong we were.

This was the year that the shoe landscape just exploded, beginning with the splashy re-introduction of Puma. Once a powerful brand in the NBA, headlined by Clyde Frazier’s signature sneaker, Puma lay dormant for several decades before introducing the Puma Clyde Court Disrupt in the summer of 2018. Puma managed to sign a big chunk of 2018’s lottery class (including Marvin Bagley, DeAndre Ayton and Kevin Knox) as well as some veterans (DeMarcus Cousins and Danny Green), bringing their total NBA roster to nine. 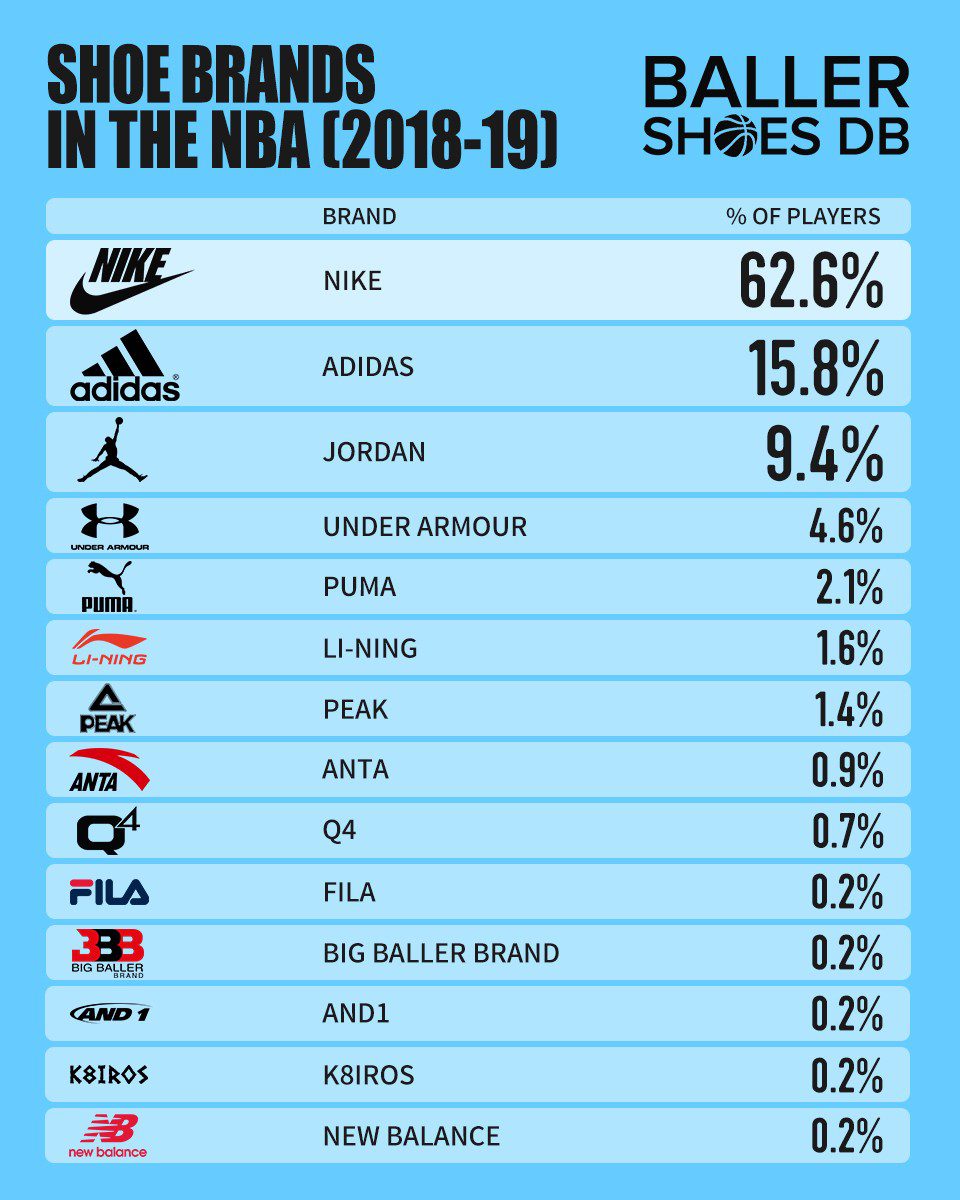 New Balance also turned heads this year with the signing of Kawhi Leonard and the debut of his OMN1s shoe, while even Fila turned back time with its first, albeit lowkey, signing of D.J. Augustin. Converse also got in on the action: although the Nike subsidiary does not plan on releasing any performance basketball shoes in the near future, it managed to sign Kelly Oubre Jr. who sports Converse gear off-court and on the sidelines. Finally, after last year’s headline-dominating launch of the Ball family’s Big Baller Brand shoes, Spencer Dinwiddie arguably one-upped the Balls with his own one-player brand, called K8IROS. Wearing a new version of the shoe every night with designs honoring figures like Rosa Parks, Prince, Colin Kaepernick and MLK Jr., Dinwiddie auctions off each game-worn sneaker for charity.

Though most players wear sneakers from the most popular list, there are a handful of NBAers who go their own way and prefer obscure or older-model shoes on an everyday basis. Consider Pascal Siakam, a potential Most Improved Player candidate. You’d think a player like that would be on the cutting edge of shoe fashion. But no, Siakam kicks it (relatively) old school, as the only NBAer who still wears last year’s Nike KD 10 model rather than moving on to the improved KD 11. Former rookie of the year Malcolm Brogdon’s day-to-day shoe, the KD 9, is now 2-years old; in fact, he’s joined by benchwarmer TJ Warren of the Suns with that sneaker.

If Siakam and Brogdon’s choices are a bit curious, then Thabo Sefolosha’s is a definite head-scratcher. The Jazz forward doesn’t even wear a basketball shoe on court, famously preferring the Nike Air Max 90, designed for running and with no ankle support to speak of. Sefolosha reportedly switched to the Air Max 90 after his infamous run-in with the NYPD that caused a broken fibula.

Then you have guys who exclusively wear retro versions of Kobe’s shoes, partially due to fashion, partially performance, and partially respect. These are hard-core Kobe-heads like Trey Lyles, DeMar DeRozan and Tobias Harris, who will pick and choose from their extensive Kobe collections on any given night to the delight and awe of shoe aficionados. Slightly more off the beaten path are LeBron-heads like Lauri Markkanen, Michael Beasley and Malik Beasley, each of whom prefer old LeBron models on most nights (primarily the LeBron 12s, 13s and 14s).

Finally, we have the curious case of the Air Jordan 10. Sure, it’s a popular retro model that Jordan fans will slip on once in a while. But it’s certainly not known as a performance shoe. Nevertheless, you can put together an entire starting 5 of players who purposely wear this old sneaker day in and day out, with Kemba Walker at point guard, DeWayne Dedmon and Andre Drummond in the frontcourt, and Sterling Brown and Jarell Martin on the wings.